The Evolution of An Icon

What started as a project for an ad campaign, quickly proved it could grow into something bigger, more tangible. 30 years ago, underground skateboarding, graffiti, and hip-hop culture choose Carhartt C to represent them. I want to show not only the evolution of a rap icon, but also the evolution of Carhartt C. The campaign is not only historic and visually engaging, but is also backed up with interactive, digital and tangible experiences for the target audience. A true 360 campaign with room for even more. The photoshoot which is the basis for the campaign involved three peers, a projector, and some wardrobe styling. One of the many challenges was to communicate the pop-up using existing spaces via photo-realistic composites. 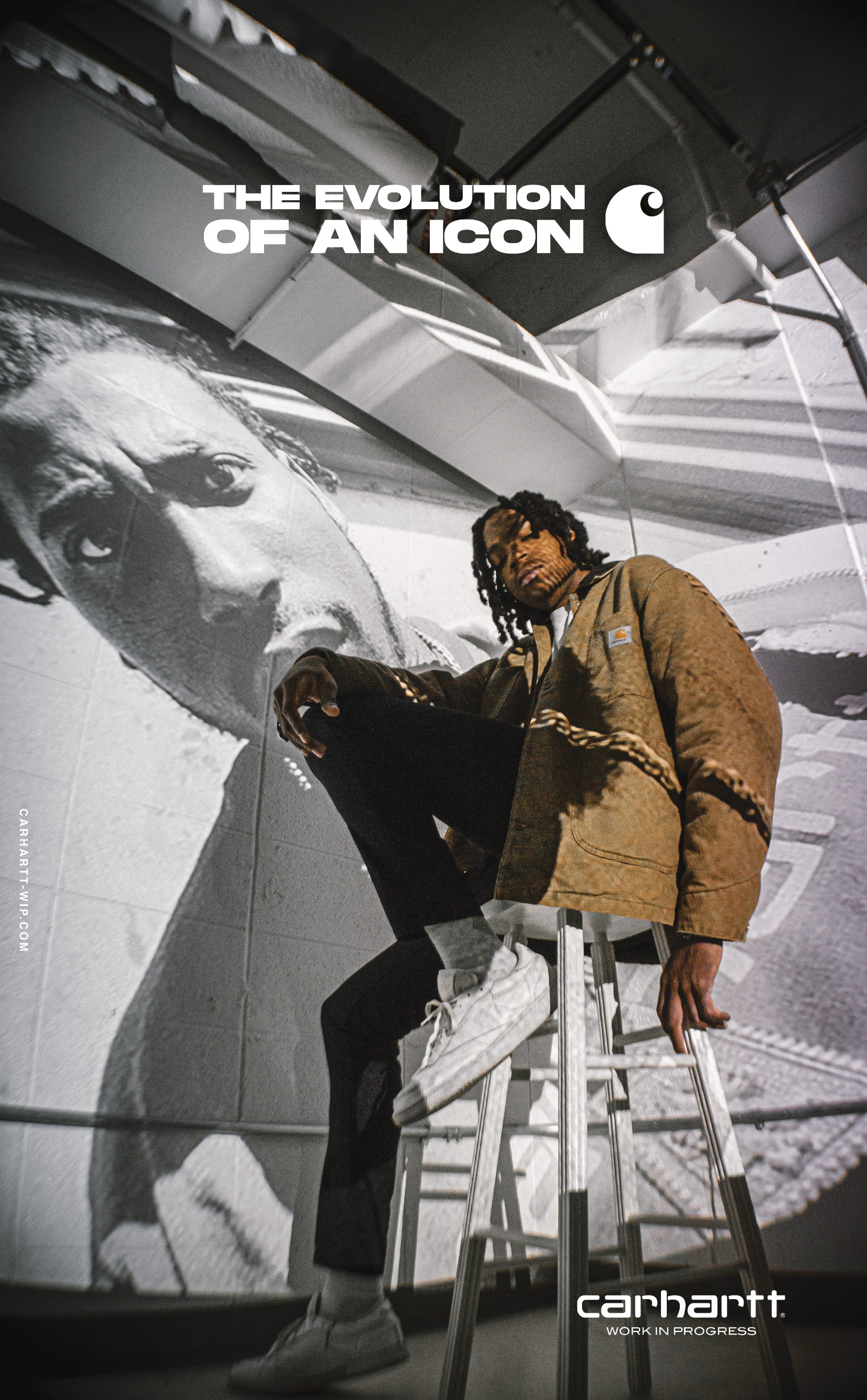 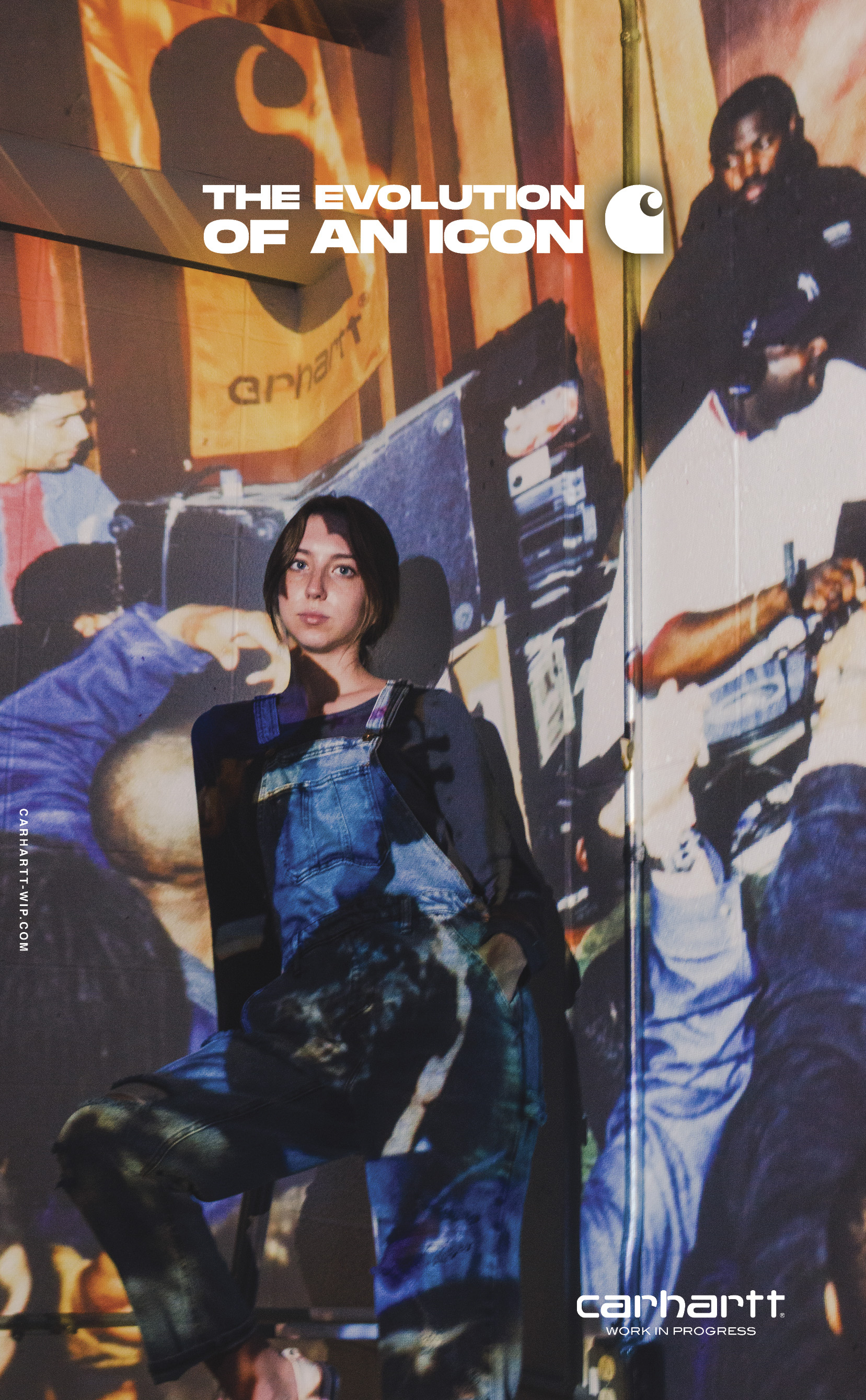 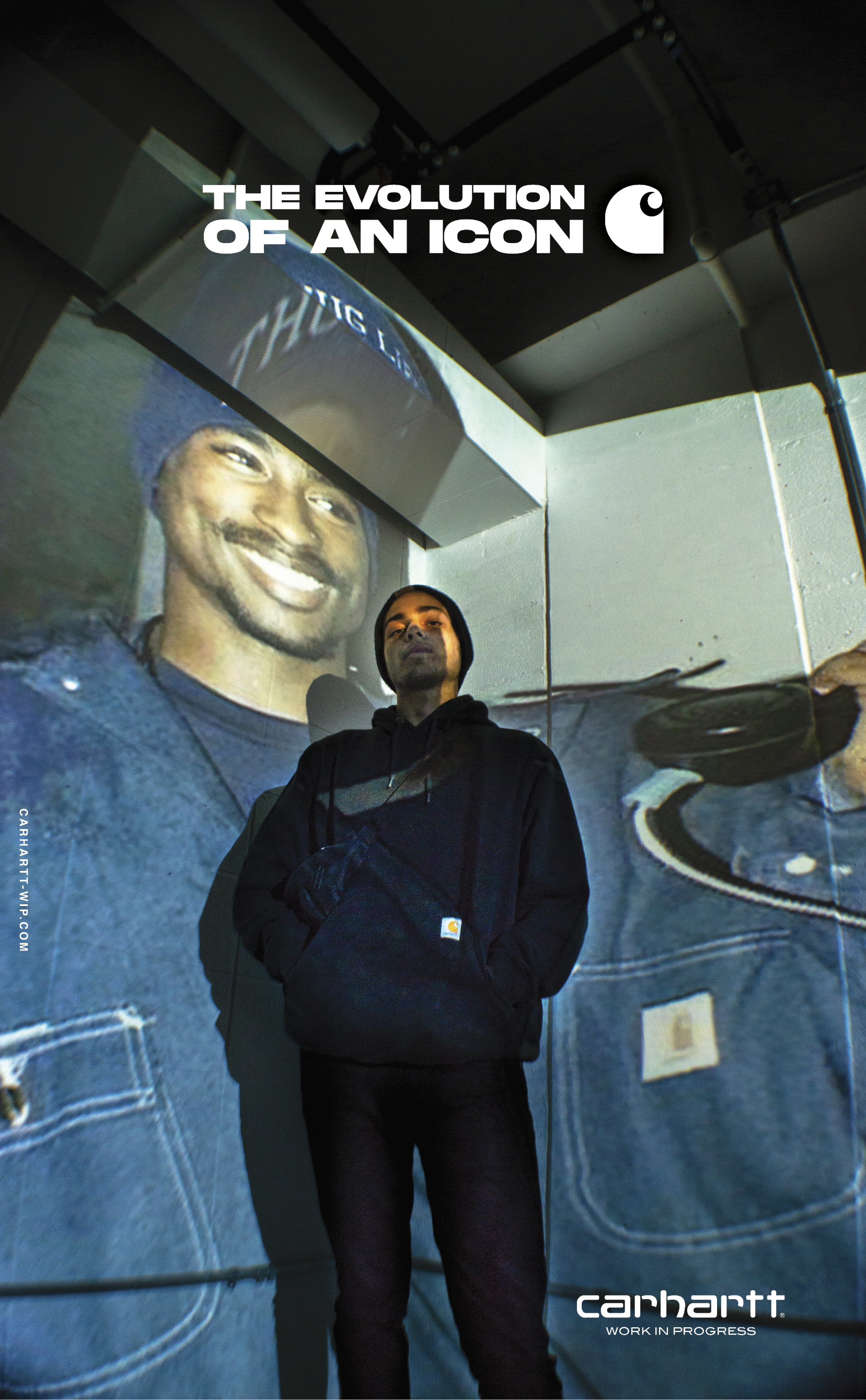 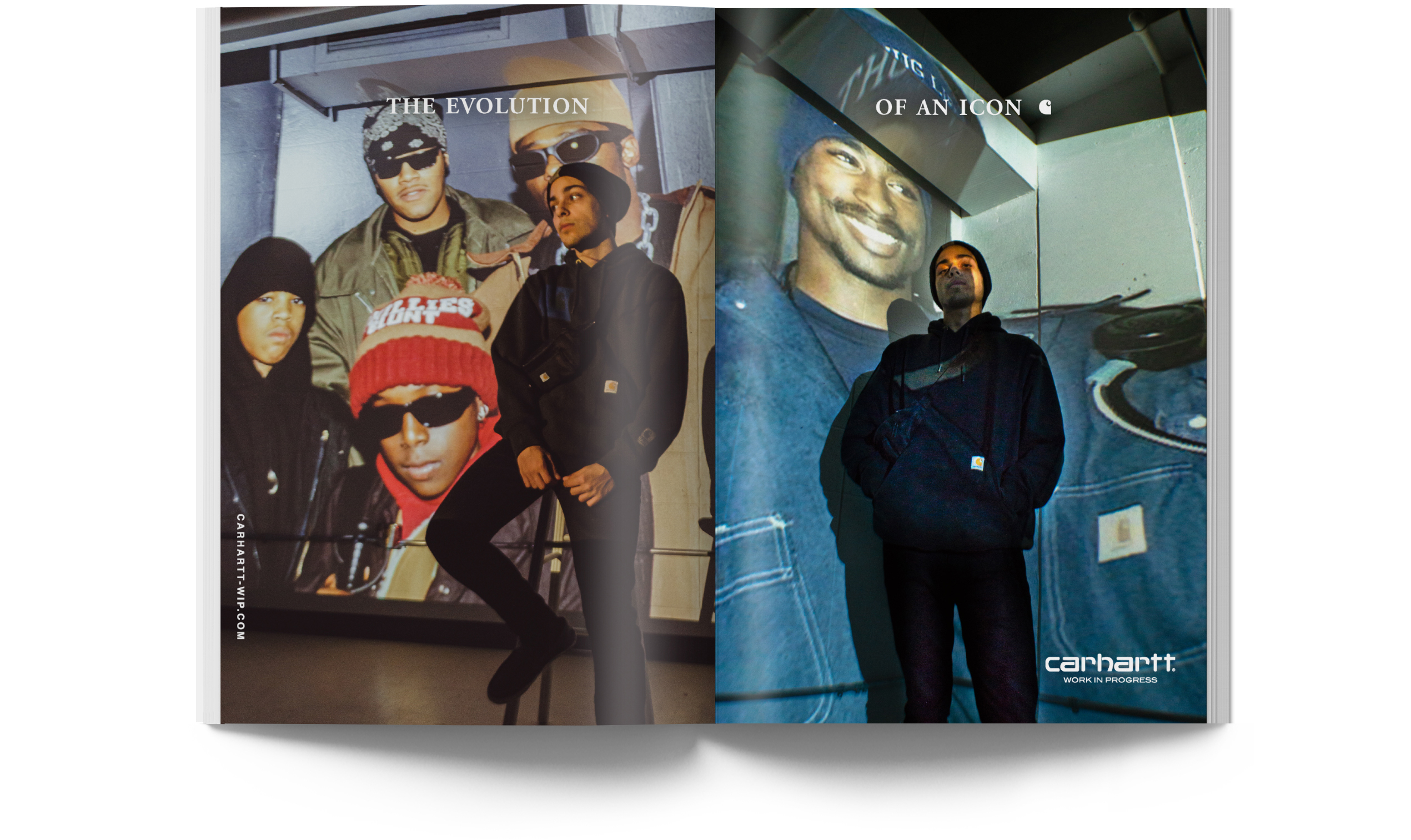 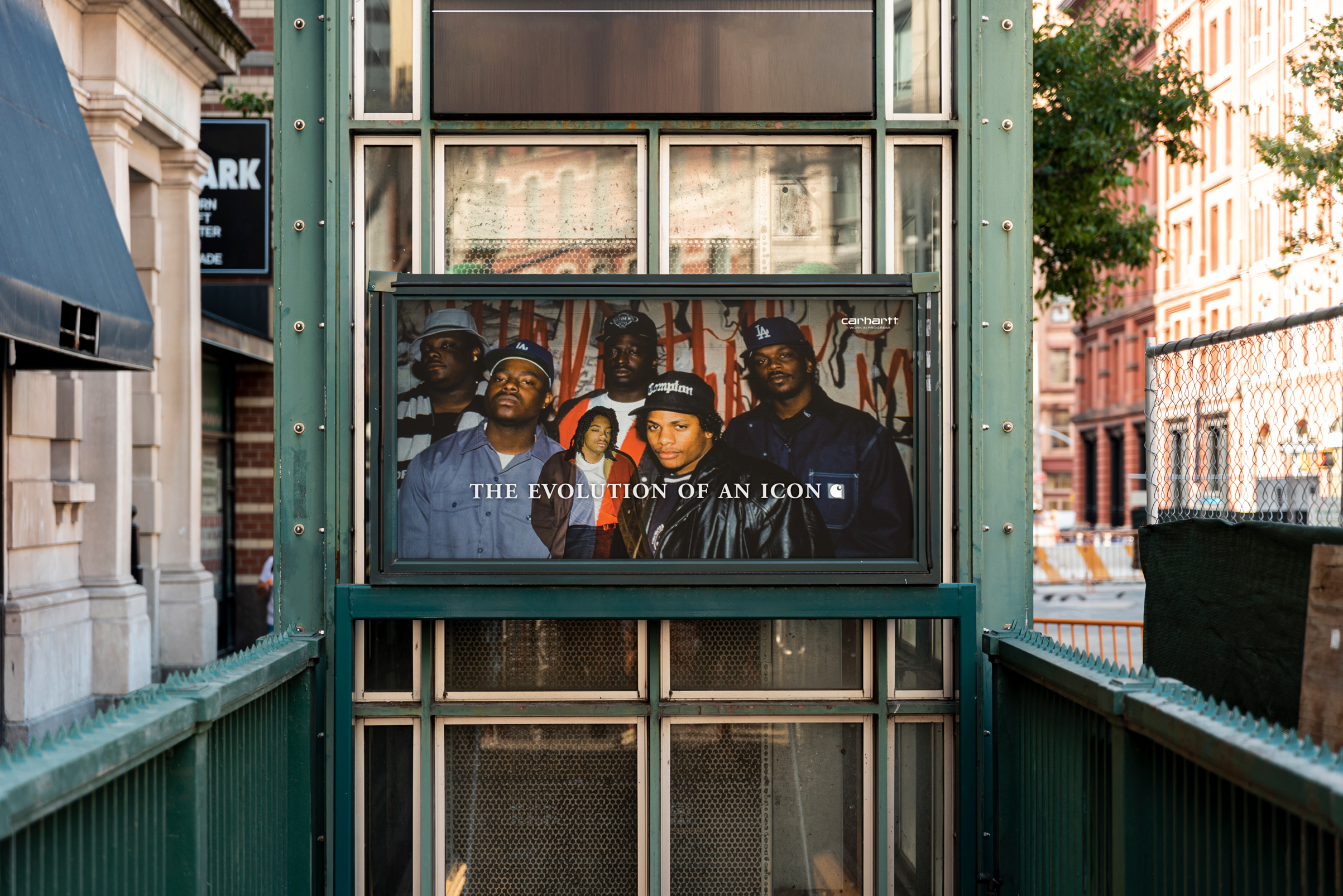 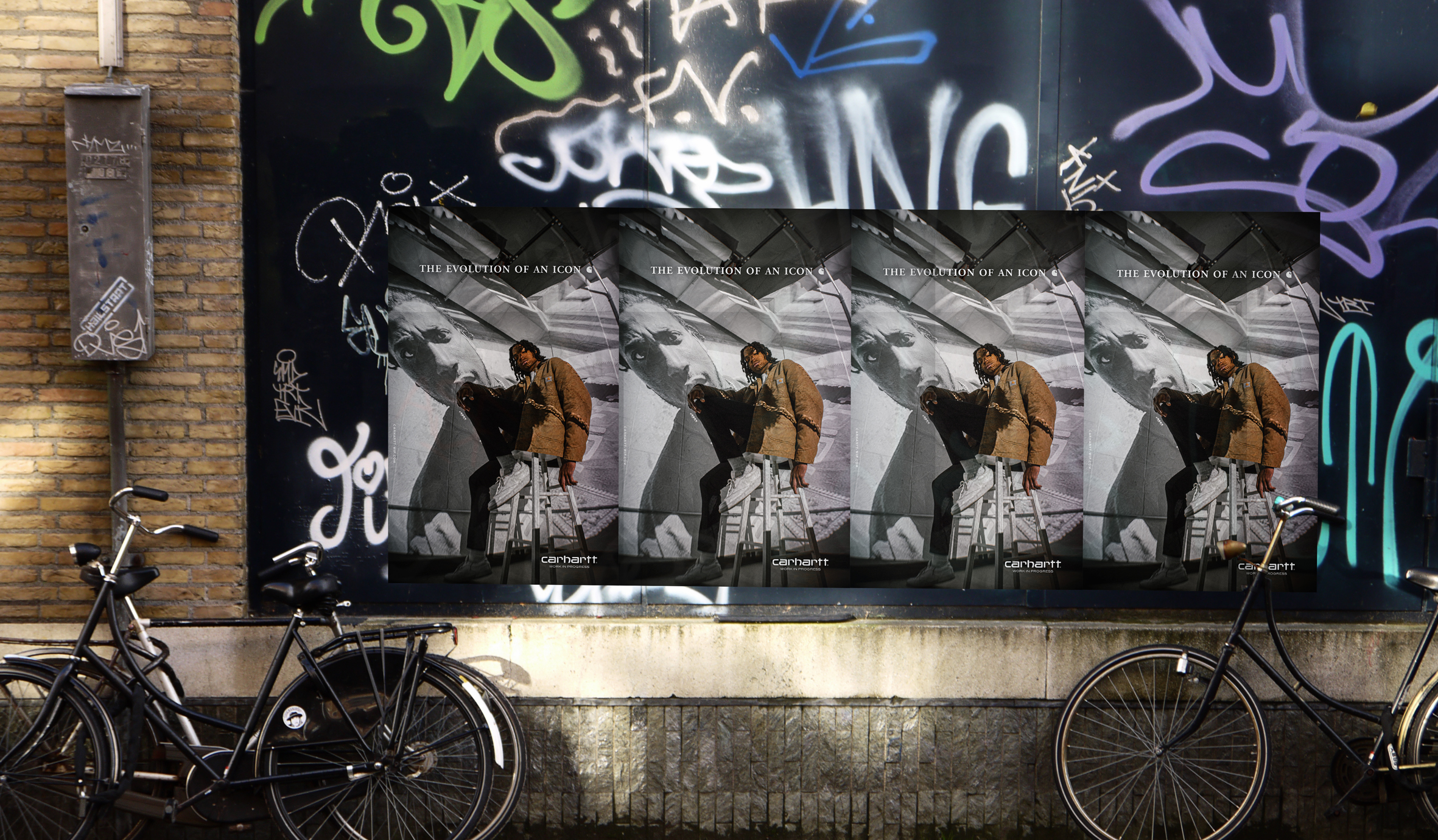 a walk through the evolution of an icon

The goal of the ambient pop-up is to provide a real-life and in-person experience that reflects the message of the original campaign while also providing interactive elements to promote social media sharing. 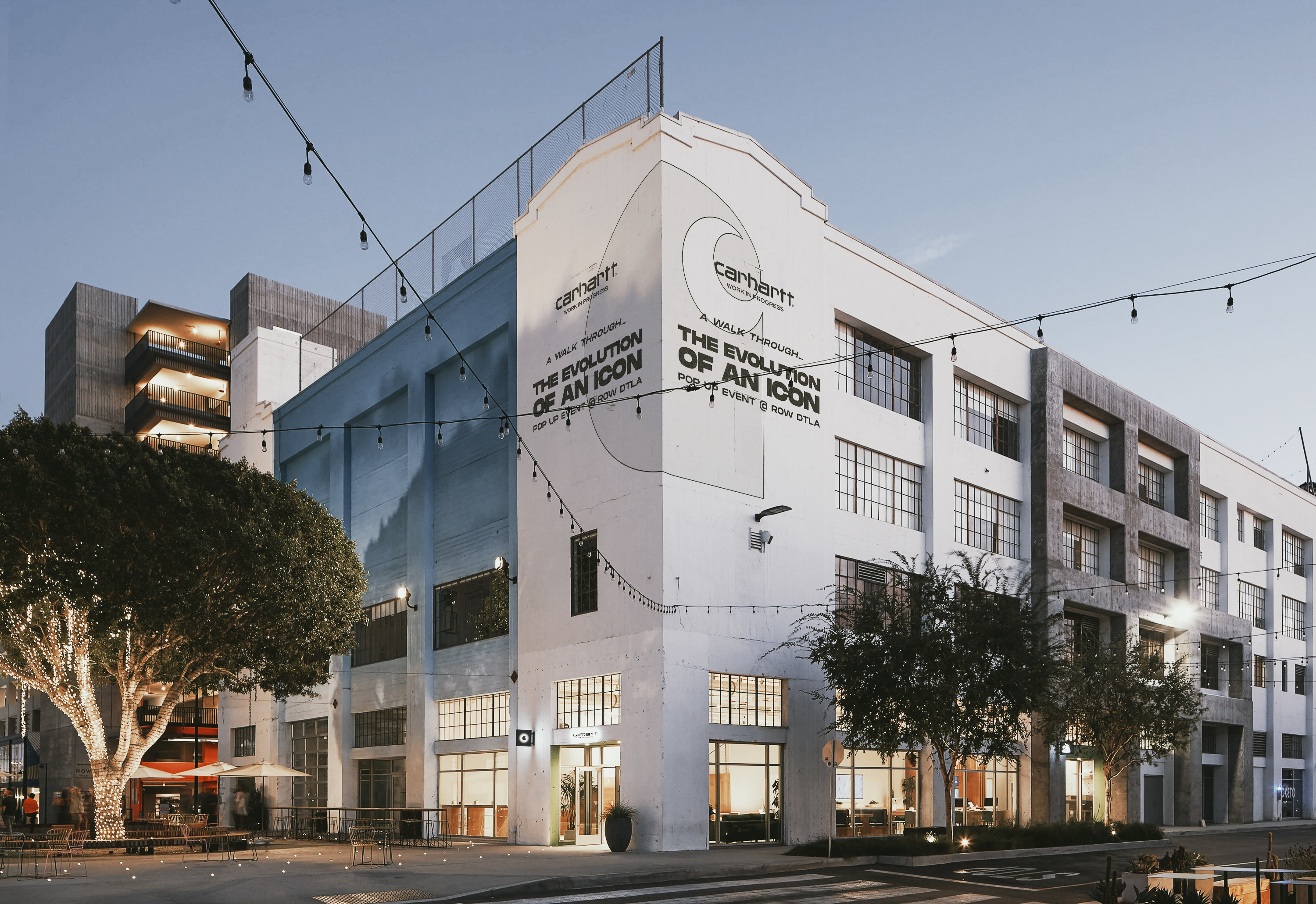 A 32-acre district with a 100 year old history that stands as one of LA’s newest creative and cultural hub. It has thoughtfully been reimagined for creative space, retail & art. This is what makes it the ideal location for a Carhartt WIP pop-up. Ample foot traffic, new daily visitors, and those who fall into our target audience. Our solution is to provide an experience through multiple physical components that suits the needs of all types of visitors. A media wall for music heads, “selfie wall” for the influencers, history timeline for the curious, and exclusive merch for the shoppers. 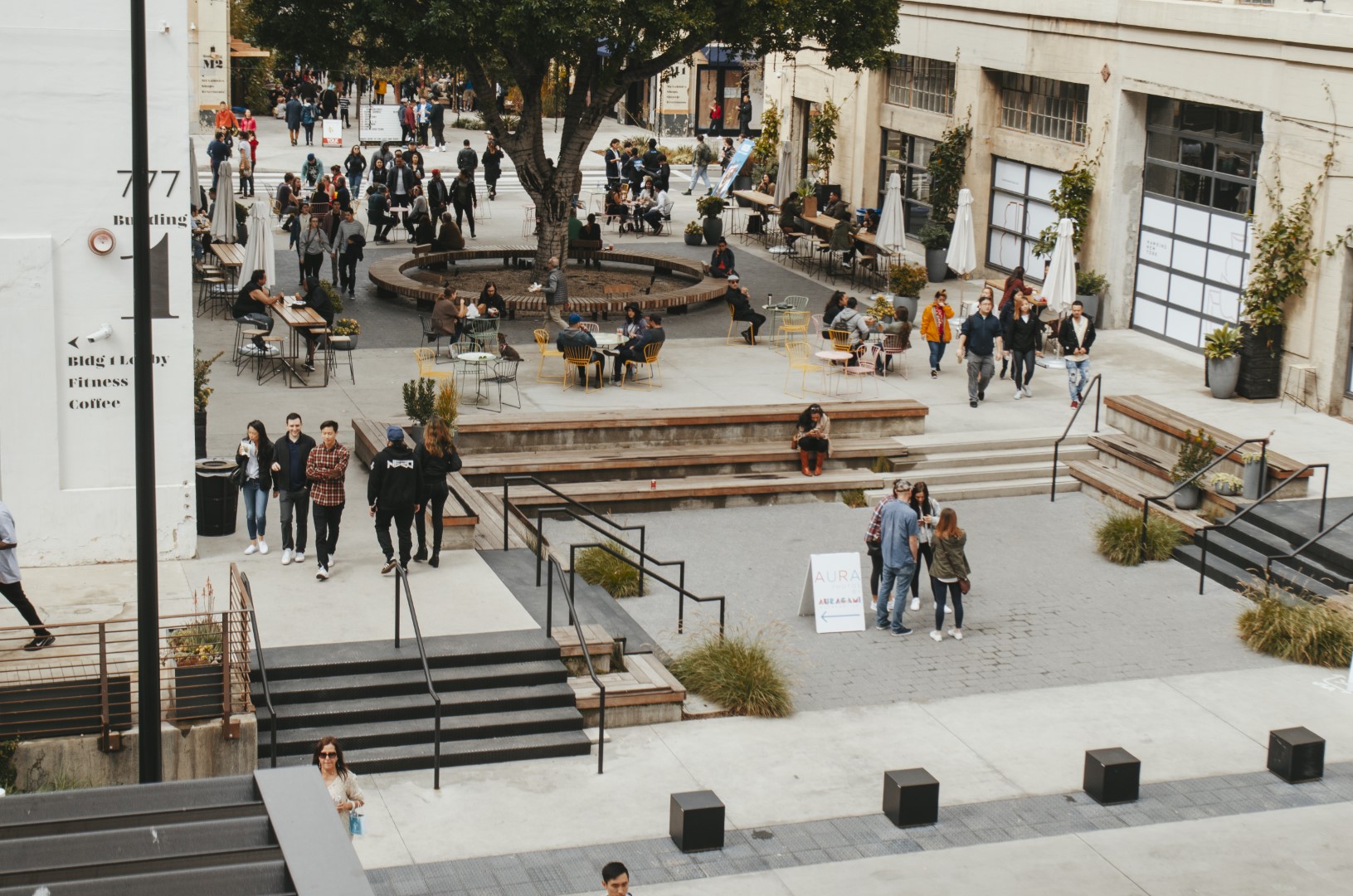 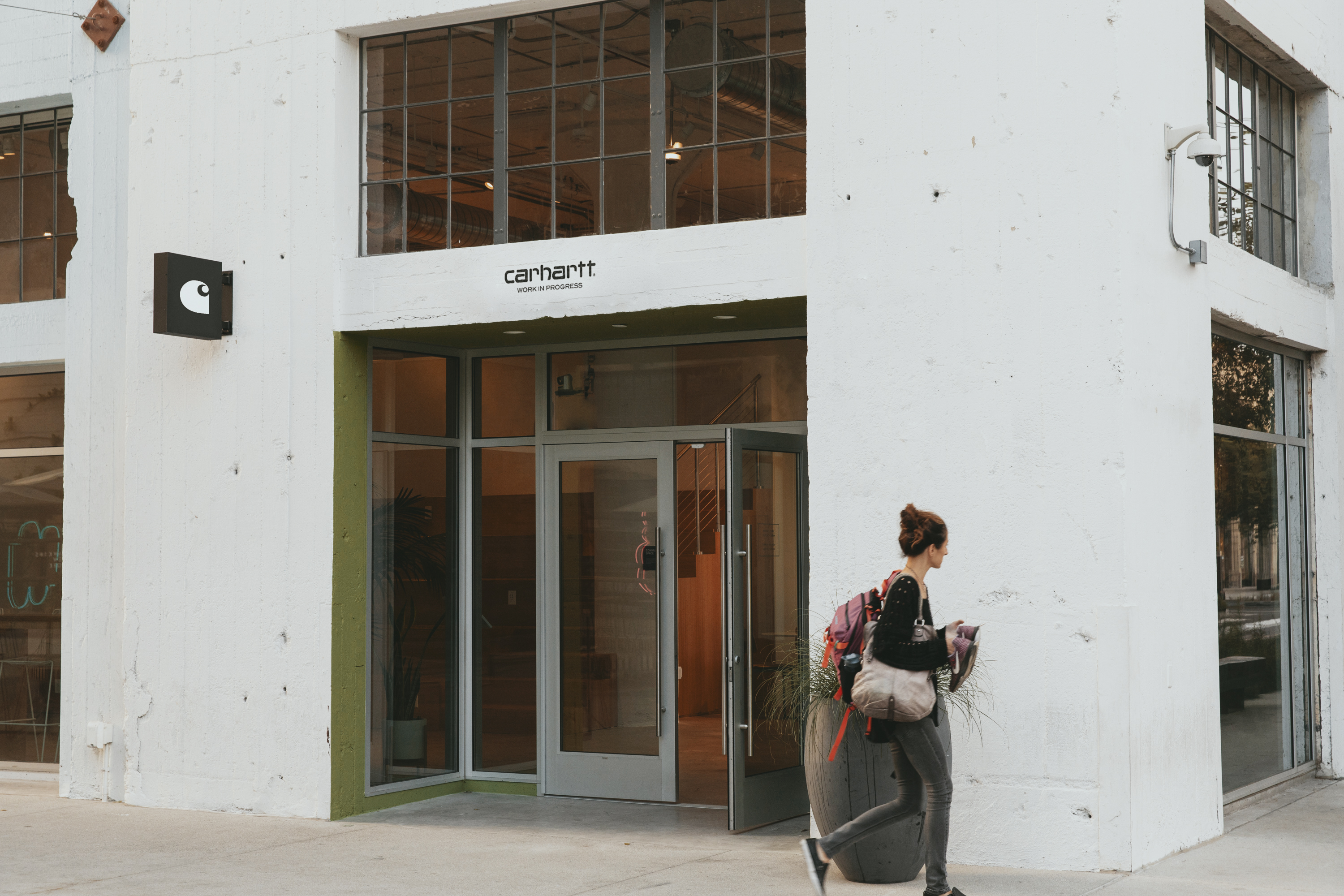 WHAT IS THERE TO DO?

Properly named A WALK THROUGH: THE EVOLUTION OF AN ICON, visitors take a path through the pop-up. Upon entering, you can be familiarized with our original campaign, hangout under the projection wall, or see what’s playing. The idea is to create an inviting environment where visitors don’t feel rushed, but can relax and mingle.

Includes a projection wall; a callback to our original print campaign. Visitors who know of the campaign, or don’t, can recreate the ads by posing in-front of the image. A marker is also placed on the floor indicating where to snap a picture. Towards the back is the media wall. These TV’s display what’s currently playing from the curated Carhartt WIP playlist. A loop of 90’s skate and rap videos will also be playing. 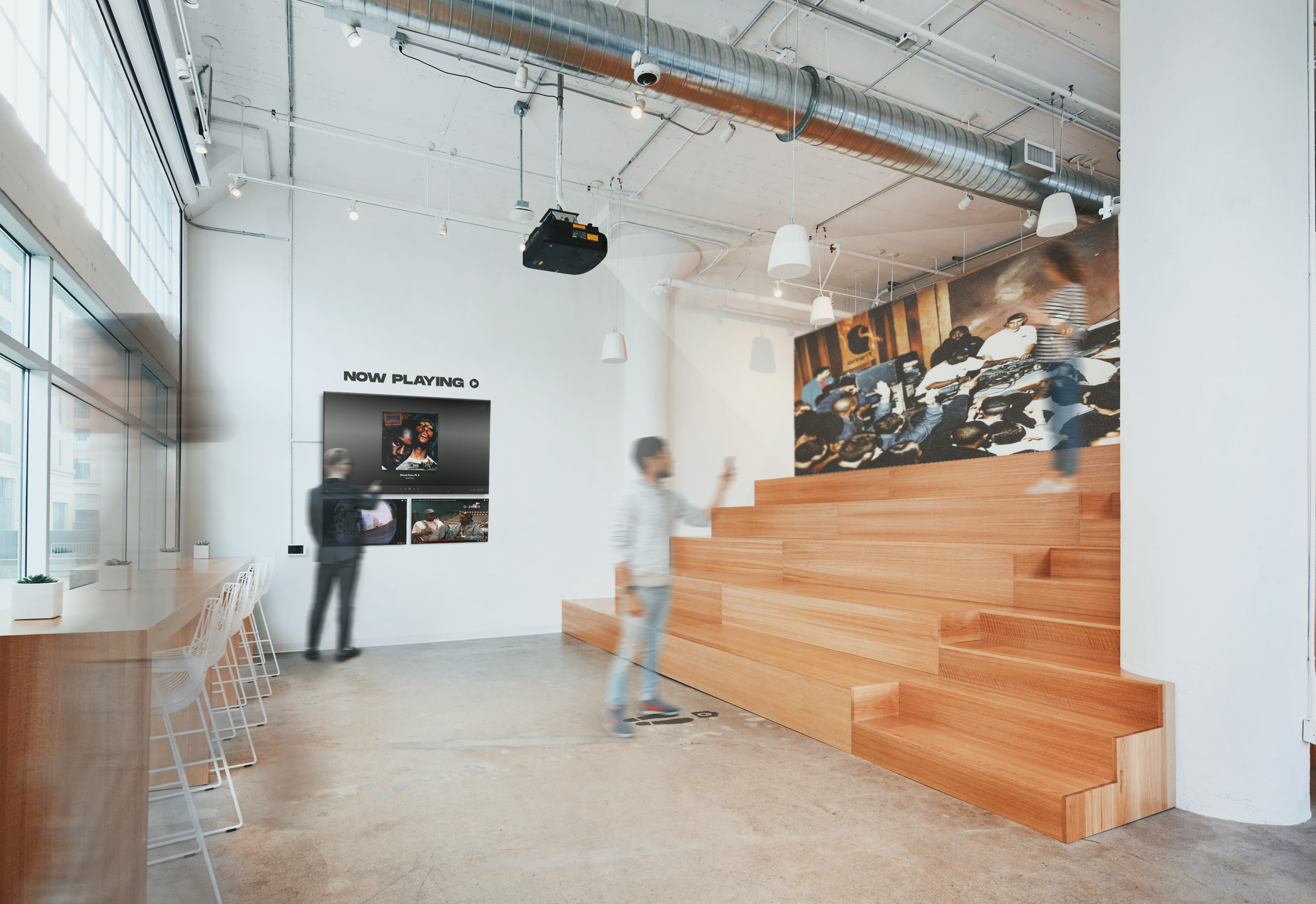 The timeline is where we can show our visitors what The Evolution of an Icon really means. A visual history of images dug up from the Carhartt WIP archives are displayed along the wall with their individual captions and years. 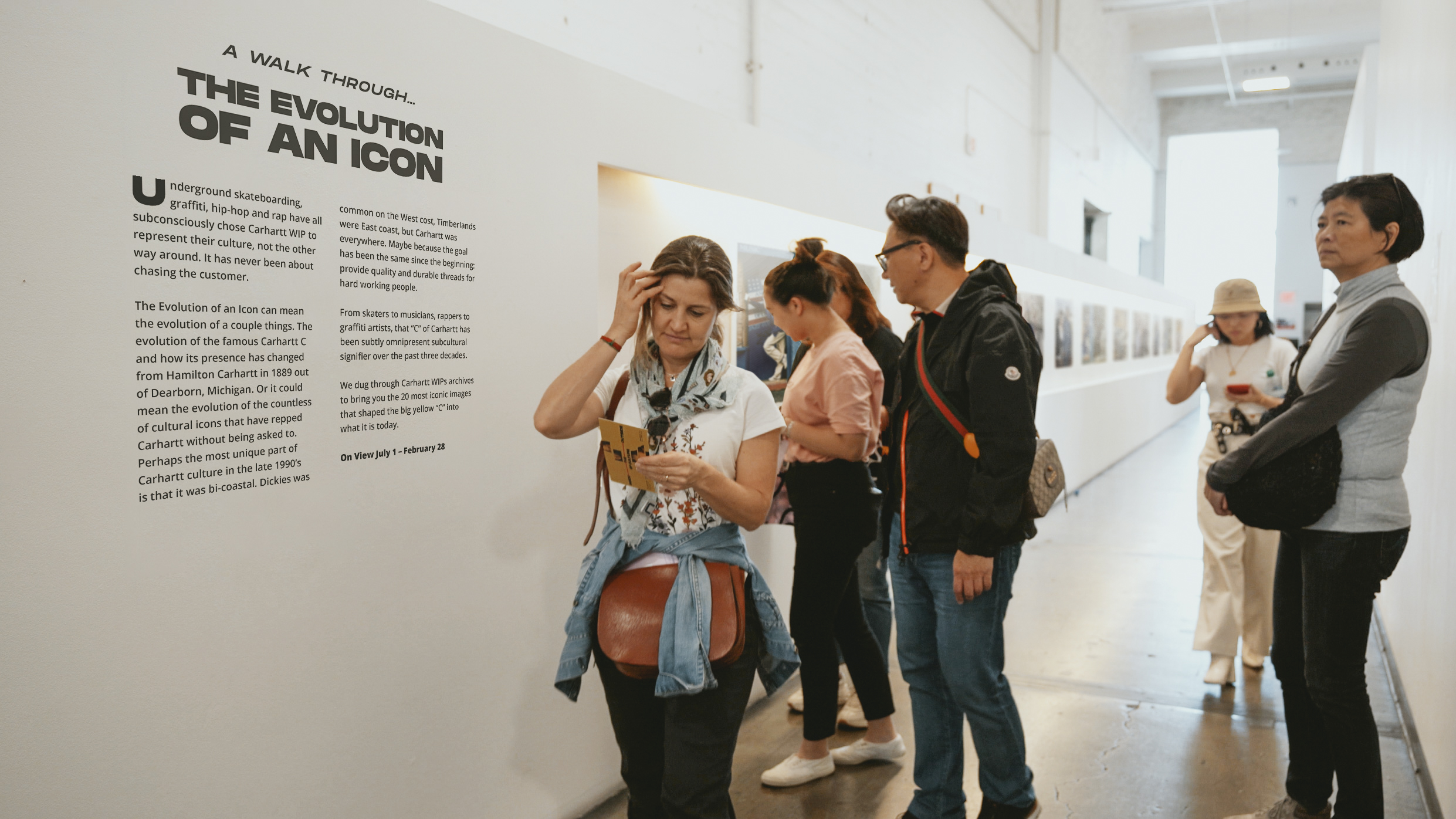 People from all over visit ROW DTLA for many reasons. To shop, work, eat, and explore, but some might want to relax in the air conditioning. That’s why I put in the lounge. Socialize, edit your new Instagram post, and enjoy the music. 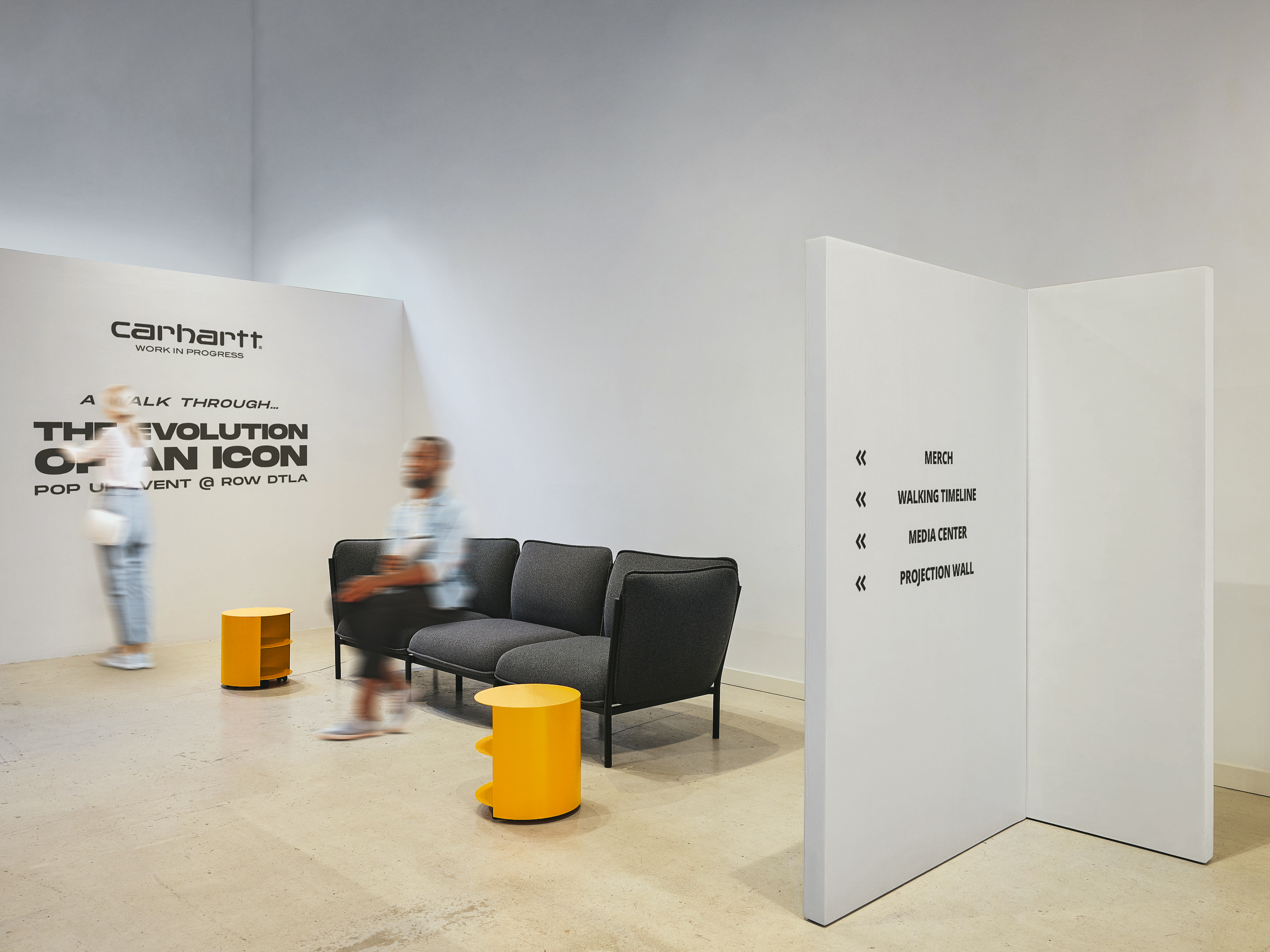 A pop-up installation with exclusive merch for an apparel brand just makes sense. Along with beanies and water bottles, on-demand tshirts are printed with the same images displayed on the timeline. Visitors pick an image, and wait for their tshirt. All on premises. 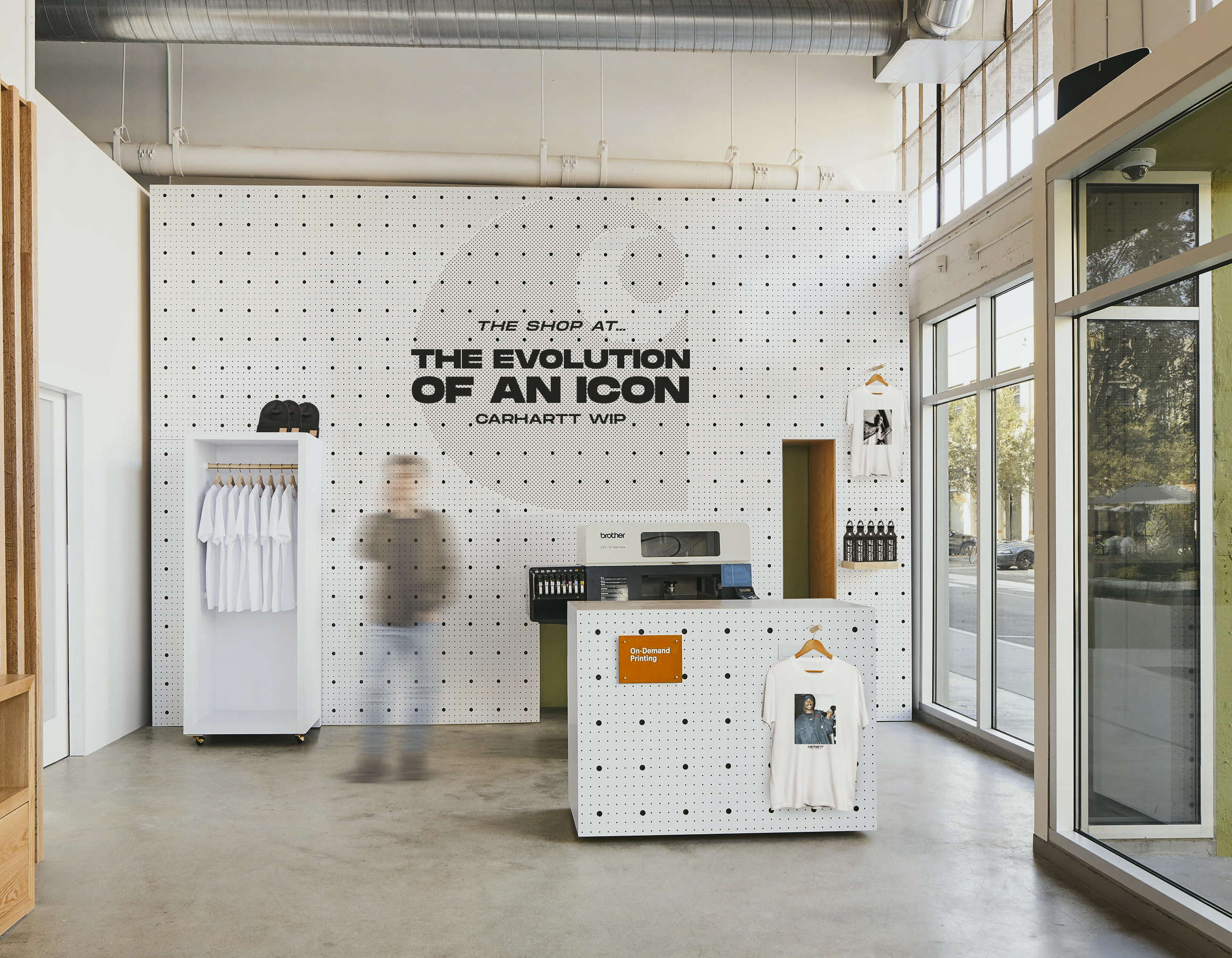